The Elysian is located at Anabu Imus, Cavite

The Elysian by Charles Builders is located in Imus, Cavite. The province of Cavite is one of those that make up the Calabarzon region in Luzon. The city of Imus is the capital of the province. It has less than half a million residents, as of the 2015 census. The LGU also classifies Imus as a first-class municipality. It is located about 20 kilometers south of Metro Manila. It is also historically important as it was the site of two major victories during the Spanish colonial period wherein the Filipinos revolted against their colonizers.

Today, Imus is a bustling city with a lot of economic and commercial growth in the past few decades. This was a gradual development but the people of Imus are now seeing the growth such that more opportunities are available within the city and province, eliminating the need to seek out opportunities in Metro Manila. An evidence of the economic growth and development is the fact that more and more house and lot developments are located in Cavite, specifically in Imus. The Elysian by Charles Builders is one of them.

Since Metro Manila has undergone massive expansion, Imus and most of Cavite are now considered as part of the Greater Manila area (due to its proximity to the National Capital Region). It is also considered as the banking center of Cavite with many financial institutions located in the city of Imus, more than any other city in the province. The banking infrastructure has therefore fueled the economy of this city and resulted in more business and commercial expansion. Aside from financial institutions, there are commercial and manufacturing establishments that operate in the city.

The fact that Imus is conveniently located just outside of Metro Manila is a good thing for the residents of The Elysian. You can enjoy the peaceful and quiet environment you seek outside of the bustling metro, which is Metro Manila. At the same time, there are plenty of opportunities in this area that you won’t find the need to go to Metro Manila quite often as you can enjoy the basic services within Imus itself.

For example, if you need to buy supplies for your home, there are several malls and shopping centers within Imus that are accessible from The Elysian. You can go shopping or do your grocery at any of the following: Robinsons Place Imus, Lotus Mall, Puregold Anabu, S&R Membership Shopping Imus, and Shopwise Imus. Meanwhile, there are also several educational institutions nearby, which is good news for families with kids that are moving in to The Elysian. Your options for schools include De La Salle University, St. Edwards Integrated School, Cavite State University Imus, and more.

For your health and medical needs, you can also find several good quality medical facilities within Imus, Cavite. For example, there are Our Lady of the Pillar Hospital and the Bacoor District Hospital nearby. The following landmarks and attractions are also located within minutes from The Elysian: Imus Heritage Park, Old Municipal Hall, Imus City Plaza, and the Bridge of Isabel II. 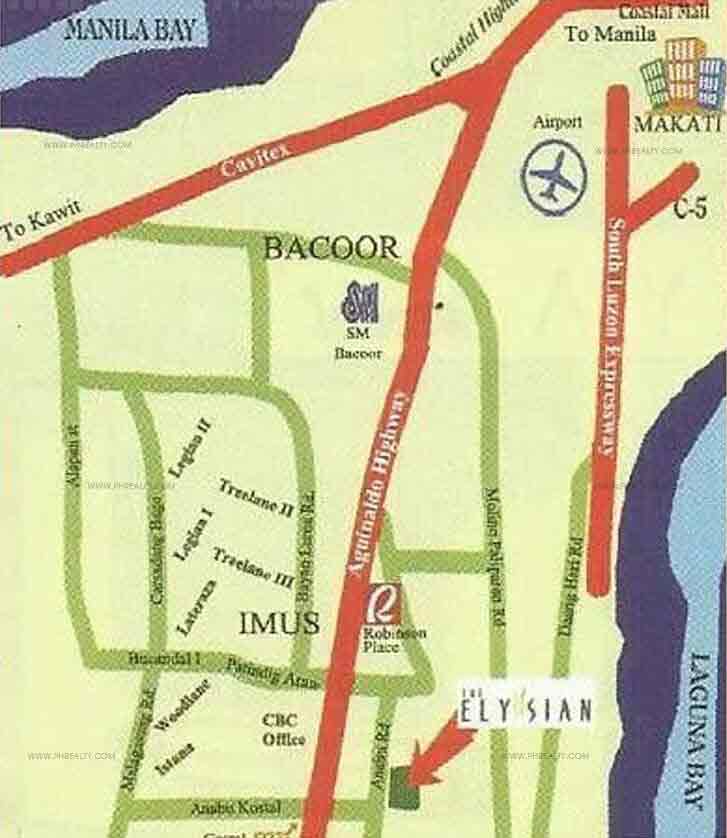